By night train to Lisbon. 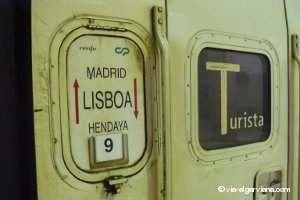 Walkers are travellers, and see their movement as authentic, honest and sustainable. They get around at a natural speed. Walkers travel under their own steam, mentally and physically, also holistically, and they take time. It is only in that way that they truly find out about their environment, a country, the people, flora and fauna of a region.

Some people walk faster, others more slowly. But for the moment, we’re going to go a small step further. In order to go walking in Portugal, we have to get there first. Can we board a plane with a clear conscience and without any concerns? Shouldn’t we arrive and depart in a sustainable manner? We hikers cannot keep finding excuses to sneak around this issue. Flying there, walking, flying home? During a flight from London to Faro, every passenger is responsible for emitting over 1,000 kilos of CO2. Now there are different foundations offering climate compensation. But how can we go walking, and simultaneously get involved in trading indulgences with climate certificates? You really can’t buy a clear conscience.

That there’s another way is shown by the railway in Europe (www.seat61.com). We can travel in a climate-friendly way if we want to. It is not only a matter of doing without fossil fuels, but also about greater modesty. And that is something that we will only achieve if we consider exactly what is really necessary and what is not. Is the aeroplane the non plus ultra as a means of transport? Are we improving the life chances of future generations in that way? When we go walking, we want to slow down and actively contribute to reducing harmful CO2 emissions. The two things go hand in hand. And so we have the chance to reach the starting point for this walk by train: Lisbon, Faro.

No matter whether you’re travelling here from Manchester, Birmingham, Newcastle, Edinburgh or Belfast, or Dublin, Liverpool, Leeds or London: every walker can easily get to Portugal on the night train to Lisbonvia Paris and Irun. The journey takes one day here and one day back. If the train trip is too long, you can stop somewhere, take a break for a day by the sea on in the Pyrenees. When we’re walking, we always have a break before we get too tired. On the Via Algarviana too, we allow ourselves time to get from Alcoutim to the south-west cape of Europe: 330 kilometres in 14 days of walking. We walk at a maximum average speed of four kilometres an hour. So, let us also slow down on the journey there and back, for health reasons too

Shall we make this walk a complete success? On a train trip to Portugal, less than 50 kg of CO2 are emitted, i.e. only five percent of the volume of CO2 of an aeroplane. And something else: walkers are nature-lovers, in terms of what we eat as well, authentic, typical of the local area, and traditional; varied, sometimes vegetarian. So, let’s look forward to a hiking tour that will do us good. Every walk is a meaningful step in the right direction.

Of course, we could also “sail like Sir Francis Drake did in 1587 when he arrived Cap Saint Vincent”. Or else like Jürgen Kahlisch, who took six months to walk from Berlin via Paris to Portugal, and is one of us …

The flight from the land 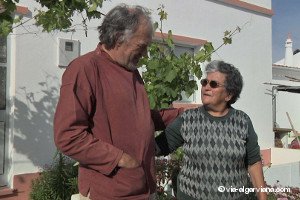 Increasing numbers of people live in the cities. Within two generations and following the Carnation Revolution of 1974, Portugal too increasingly developed an affluent area along the coastline. To some extent, that has come about because of the easy and cheap tourism business, and the outlook for work and salaries for young people. Earning money as a way of making sense of one’s life, and the simultaneous wasting away of the established social and cultural structures of the interior, of the villages. In some municipalities in the Algarve hinterland and the southern Alentejo, there are now fewer than six inhabitants per square kilometre. An example is Alcoutim. 576 km2 and 2,917 inhabitants spread over five parishes: Alcoutim, Martinlongo, Pereiro, Giões and Vaqueiros.

That is where the Via Algarviana begins, the old pilgrims’ way of St Vincent. The name Via Algarviana is synonymous with a footpath that leads through the hinterland of Portugal, to be precise through the northern Algarve from the north-east to the south-west. The coast and its conurbations can meanwhile be seen in the distance. The walk leads through the hinterland, through its nature, over hills and rivers. We mostly encounter older people, the ones who’ve stayed behind, who still live and work authentically here and there. As their pension is barely enough to live off, most old people in Portugal are still working. For many spoiled, affluent northern Europeans, that is certainly an expression of poverty. But is it really?

It is not possible to live a true life in a false system.

On our walk, we drop in at the house of the family of Senhor Henrique and Doutora Maria José in Furnazinhas, a village that we reach after the second day on foot, after 14 kilometres. We overnight there in the Casa do Lavrador, (lavrar terra = plough the soil) a restored former farmhouse. Dona Olivia, aged 74 and actually already long retired, prepares a traditional breakfast for us on our third morning of the walk: with honey and jams from her own kitchen, with fresh cheese from the goats, ham and chouriço made from Iberian pigs, oranges and tangerines from her own orchards, and a bela luisa (lemon verbena) tea from the bush on their plot. Why is Dona Olivia still working, someone asks from time to time. It is only with patience that we learn more about the people, their villages, their traditions, their lives, that we hear their very personal stories that gradually come together to form a picture.

Together with my Portuguese colleagues João, Miguel and Carlos, I made a documentary film about this life, and am working on a book. Both are entitled “Revolutionary Roads”. The film is about 60 minutes long. In it, the people we meet on our walk have their say. They tell of their land, their lives in isolation with nature and their animals, and of their work. You can find out more about this on the page “The Film” on this website.

On the third day of the walk, we meet Senhor Manuel Teixeira, the last inhabitant of the village of Ferrarias in the parish of Vaqueiros. The 83-year-old farmer has been living alone for nine years, just with his cats and several donkeys. He continues to grow potatoes, onions, beans, pumpkins, tomatoes and lots of other vegetables on his plot. We stay overnight in the guest house of the Moorish mines. That’s where Manuel Teixeira lives in a neighbouring house and looks after the animals on the property. 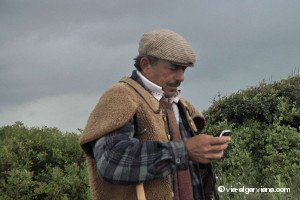 After Vaqueiros, the hills begin and the path leads us up into the Serra do Caldeirão. Past medronho bushes and beehives, through groves of cork oaks and past eucalyptus plantations we come to Cachopo in the municipality of Tavira and Dona Otilia. She shows us the products of her labour that are made from the natural product flax, as well as the spinning and how a loom works: an endangered craft. Via Feiteira, Cortelha and Salir we walk towards Alte. We have got half the walk behind us.

Traditional subsistence farming and old Moorish wells are what we come across on our walk. We visit Idálio Ramos Martins in the hills of Portela de Nave. He makes fresh cheese, processing the milk from his approximately 150 goats. 31-year-old Martins is among the very few young people in the region who have stayed and founded a cheesery.

By contrast, in the hills of Silves, we come across the forestry business of the paper industry. Eucalyptus plantations are one reason why there are fires again and again in Portugal during the summers and when temperatures rise to over 45 degrees Celsius. Eucalyptus forests are highly explosive. While traditional forests made up of cork and holm oaks, of carob and chestnut trees etc. very rarely catch fire, eucalyptus provides fuel for every forest fire because of its ethereal oils. The extremely environmentally harmful paper industry is responsible for five percent of all Portuguese exports. The company Portucel/Soporcel has a turnover of almost two billion euros a year with eucalyptus (2012). But where eucalyptus is grown, hardly any other species of plant or tree grow. The roots of this fast growing, energy-intensive tree suck up all the water – including the groundwater – for their own nourishment. Monocultures of the eucalyptus forests accompany us in the region of the old Moorish city of Silves.

On the eighth day, we climb up into the hills. Fonte Santa, a medieval spring with a bathing house lies to one side of the route, and is not mentioned on the official route of the Via Algarviana. But the pilgrims’ way leads past it and into the uplands. We change route and walk to Caldas de Monchique. We enter the green lung and water protection area of the Algarve. Everywhere we come across springs that gush into streams and flow downhill into the sea. A day when we have no problem in filling up our water bottles again.

In the hills of Monchique, we visit the now 75-year-old farmer Senhor António de Encarnação. He still cultivates his fields every year, growing potatoes, sowing maize, beans and many other vegetables. He keeps a couple of Iberian pigs and distils one of the best medronho brandies that the country produces. Along a narrow old path, we climb up to the 776-metre-high Picota. On the way down, we walk through the most beautiful cork oak wood in the south, come across a water mine and reach the upland village of Monchique. In the afternoon, we climb again, and walk past the ruins of the old convent up to the 902-meter-high Fóia into a mountainous world of goats, sheep and cows that move around freely grazing on the northern terraces of the uplands. The day’s march of 27 kilometres is the jewel in the crown of this long-distance walk.

From the roof of the Algarve when the weather’s good, we can enjoy our first view of the south-west cape, 70 kilometres away. Sea to the south and to the west – the Atlantic as far as the eye can see. We walk to Barão São João and Vila do Bispo. Senhor Manuel António Violante still works there as a shepherd. We meet him most often with his goats and sheep in the moorland before the cape. Not all the secrets and not all the magic of this walk can be revealed at this point. The path is the goal, hikers! Every walk is unique in its experiences for travellers. So, let’s head for the south-west cape with its unique lighthouse, three-quarters surrounded by the waters of the ocean. When the weather’s good, we also take a dip in the sea… 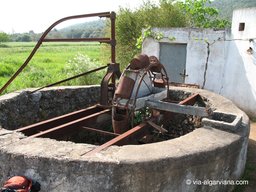 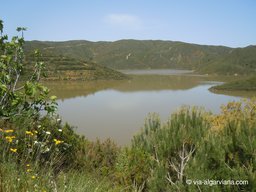 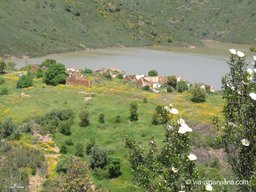 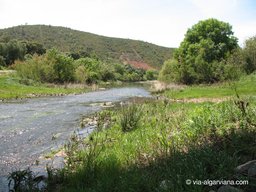 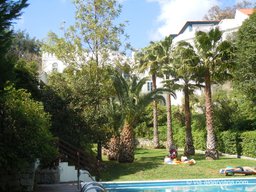 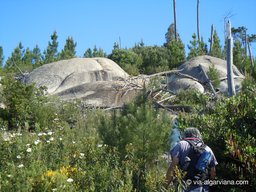 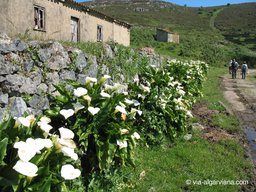 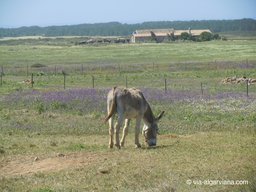